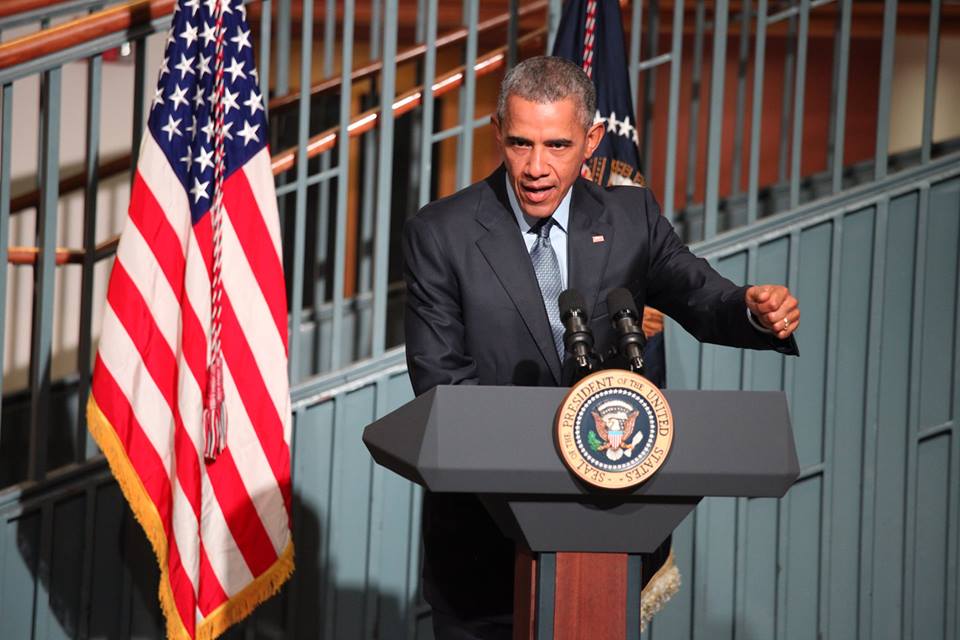 n Monday, November 2, President Barack Obama visited Newark, NJ, to highlight new legislation as part of his criminal justice reform. During the president’s time in Newark, he visited Integrity House, a residential facility and rehabilitation organization. Afterwards, he traveled to Rutgers University – Newark, where he convened a roundtable discussion with key leaders in the criminal justice reform movement and those directly affected by the changes before giving a statement.

Nearing the end of his eight year presidency, the president is bringing his focus back to what brought him into office in 2008: hope and change.

The executive action to ban the box means removing a box from federal job applications asking if the applicant has a criminal record. The president explained that the federal government “can’t dismiss people out of hand simply because of a mistake that they made in the past.”

The president announced that his administration will be partnering with cities to duplicate the progress Newark has made with programs built to help incarcerated individuals reentering society.

Right now, the progress is “nowhere near what we need, but it gives us more ability to create more programs that serve as an example of best practices so it can be duplicated around the country,” he said.

“Give folks the chance to get through the door. Give ‘em a chance to get in there so that they can make their case.” – President Obama

The president is not the only one working toward removal of the box. NJ Senator Cory Booker and Wisconsin Senator Ron Johnson are working together on a “ban the box” bill, according to the president, which is currently working its way through the Senate. The bill would reduce mandatory minimum sentences for nonviolent offenders, invest in law enforcement, and reward prisoners with time off after completing certain programs.

“It will not completely change the system overnight,” the president reminded listeners, “but it will lock in some basic principles that we understand are going to make us a fairer and safer society over the long-term.”

Before giving his statement in the S.I. Newhouse Center for Law and Justice, the president convened a roundtable discussion with Sen. Booker, Newark Mayor Ras Baraka, and others more directly involved in the reentry process. The president explained how his visit and the discussion gave him “a first-hand look at how Newark is helping to lead the way” and focusing on “disrupting the pipeline from underfunded schools to overcrowded jails.”

NJ Senate President Steve Sweeney explained that not only does it cost “too much money to keep people in jail,” but the United States also “has the largest percentage of people incarcerated in any place in the world.”

“That doesn’t mean we’re right and everyone else is wrong, that means our system is wrong and we need to fix it.” – NJ Senate President Sweeney

“Right now there are 2.2 million Americans behind bars,” said the president. “We account for 5% of the world’s population, 25% of its inmates, they are disproportionately black and latino.” Newark activist Junius Williams also commented on racial disparities within the criminal system.

The president’s first stop in Newark was Integrity House, a residential facility and rehabilitation organization. There he was able to speak with recovering residents who are in the process of reentering society and trying to move forward. Integrity House provides substance abuse treatment services in both residential and outpatient programs.

Former NJ Governor Jim McGreevey spoke on the importance of these types of programs and organizations, like Integrity House and Project Hope, that help prevent recidivism.

Though there are many issues with incarcerated individuals reentering society in a way that helps them create new futures for themselves , the president emphasized that for the new initiatives to succeed, there has to be a national team approach.

Throughout the country, legislators, pastors, parole officers, the incarcerated themselves, and many others have realized there is a lack of support for reentering individuals and are coming together to find a solution to the national problem.

The president then went on to point out several individuals who have successfully gone through the reentry process and are now contributing members of society. He focused especially on one man, Dquan Rosario, with high remarks on his change and the hope that he brings the president and others in Rosario’s shoes.

“There are so many Americans that desperately want to earn a second chance.” – President Obama

Rosario was arrested for his first drug charge when he was 17 and received a ten year federal sentence for drug distribution when he was 27. After being released at 37, Rosario admit that he was homeless, and with no legitimate employment history, it would be hard to find work to support himself without reverting back to old habits. The president expressed that “something happened inside of Dquan so he had a motivation to say, ‘I’m going to change,’ which is really hard to do at 37.”

Since that realization, Rosario has been part of Newark’s Justice Department program ReNew. With the help and close guidance of his probation officer Kevin Egli and Judge Madeline Cox Arleo, Rosario found a job in medical transportation, pursued his EMT certification, and is now an EMT in Essex County.

“With hard work and the grace of God, anything is possible.” – Dquan Rosario

Rosario’s realization of a need for personal change came to him while he was incarcerated.

The president spoke in volumes of the progress Rosario has made, not only due to his own determination, but also because he has been given “a community encouraging him to move forward.”

President Obama hopes to finish his second term with change that will last and affect the entire country. Being the first sitting president to visit a federal prison, announcing these two executive changes is defining his work toward fixing the criminal system and reentry process for incarcerated individuals.

You can hire me for: